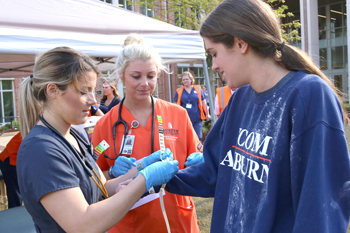 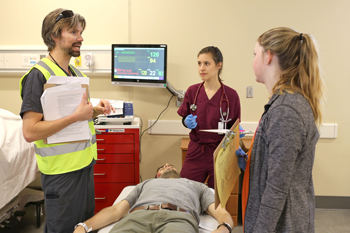 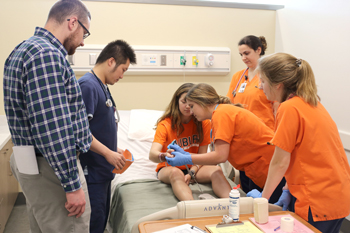 Usually a peaceful area, the courtyard at the new Auburn University School of Nursing building was a frantic scene on Friday, April 27 as wave after wave of simulated disaster victims scrambled for assistance. VCOM-Auburn osteopathic medical students and AU School of Nursing students worked quickly to assess injuries, sort victims and get them transported to simulated hospital emergency rooms on the second floor. Four simulations were held during the 2018 Disaster Day drill in order to accommodate all of the second-year VCOM students and senior nursing students.

Through the use of theatrical makeup, the day’s “victims” displayed a variety of injuries including abrasions, lacerations, burns, broken bones and more. And if that wasn’t enough of a challenge, an injured pregnant victim was included in each scenario. Following a theoretical transit bus accident on a game day, victims moved or were assisted toward a decontamination tent, then entered a triage tent where their injuries were evaluated. They were then sorted by severity of injury on color-coded tarps, and subsequently transported to one of four simulated emergency rooms in the sprawling second floor simulation area of the Auburn University School of Nursing.

In the School of Nursing building, the EAGLES Center closely simulates a hospital setting with hospital beds arranged around the perimeter of each room. Manikin simulators are located throughout, and tables are set up in the centers of the rooms so that nursing students are able to practice various medical procedures on task training manikins. During the disaster drill, this spacious simulation area allowed for a total of 48 patients with 32 utilizing beds (yellow or red color code) and 12 seated in chairs (green color code). The simulation area was divided into four “pods,” which acted as four separate hospital emergency departments. VCOM-Auburn and AU School of Nursing faculty were assigned to each pod and worked with the students from both schools to insure patients were being cared for properly. The simulation area buzzed with activity during the drills as students actively interviewed patients, consulted faculty members and initiated treatment.

As compared with last year’s event that included community emergency responders like AU’s Office of Risk Management and Safety, the Auburn Fire Division, the Opelika Fire Department and others, this year’s event focused less on the pre-hospital aspect, and more on the clinical interaction where VCOM and AU Nursing students worked as a team to treat patients in a realistic, hospital-like setting.

“I think this is such an important event,” said Gregg Newschwander, PhD, RN, Dean of the AU School of Nursing. “The relationship between both schools is so important, and I hope this leads to many more collaborations including research and training for our students,” he added. “The future is all about patient-centered care teams and the more our students work together, the more benefit there will be for everyone,” Newschwander added.

VCOM and AU School of Nursing students agreed that the event was a valuable training exercise. “I feel like it was a great event where everyone worked together and helped, and a lot like the emergency room where patients are assessed and treated,” said Blake McClellan, a senior Auburn University nursing student. “It was truly like a real-life scenario,” he added.

“I had the opportunity to participate in a code and work alongside VCOM students to provide patient care,” said Savannah Kolb, a senior AU nursing student. “It was a great way to refresh my skills and confidence,” she added.

“It was a good opportunity for us to work together and see how we function differently and as a team,” said VCOM-Auburn second-year student Heather Milloy. “It was a great learning experience because we could learn from each other and improve patient care, which is our primary goal,” Milloy added.

All three VCOM campuses include disaster training as part of the medical education for second-year Osteopathic medical students. The major objectives of this unique program include developing local and regional disaster responses to mass trauma, a community disaster preparedness response model, trauma management skills, the ability to communicate and work with local, state and federal medical and non-medical authorities and to train others who would be involved in any disaster response. VCOM Students were tested after the event to receive their Basic Disaster Life Support (BDLS) certification.

Faculty at VCOM and the AU School of Nursing were pleased to see the students work together to aid the simulated disaster victims. “It was great to see each school’s students jump in, assess patients and work together,” said Robin Gosdin Farrell, DNP, MSN, FNP-BC, associate clinical professor at the AU School of Nursing. “The realism of today’s event has helped to give everyone a sense of urgency, which can be challenging, but highlights the need to stay on task,” Farrell added.

Paul Brisson, MD, VCOM-Auburn’s discipline chair for surgery, worked closely with students in one of the simulated emergency rooms throughout the day. “The collaboration between the two schools is extraordinary and is also the big message today – the students worked exceptionally well together during the drills,” said Brisson. “That is not necessarily a given as you never know how two different groups with different training will work together,” he added.

“This has gone far better than we had hoped as far as the students’ ability to work through the disaster scenario as a team appropriately and efficiently, said J.J. White DO, PhD, VCOM-Auburn discipline chair for emergency medicine. “We are very fortunate that the AU School of Nursing agreed to host the event this year – it made the event that much more impressive and successful,” White added.

At the close of each of the day’s four disaster drills, a debriefing was held in the first floor auditorium with VCOM and AU Nursing students. In addition to discussing how each drill had unfolded, students were asked how they would improve the process. At the end of the final debriefing, White offered praise for the location of the drill. He also noted how accommodating the facilities and the people at the School of Nursing had been. “We are neighbors, and we truly hope to get to know each other better and work together on many more projects,” said White. “At the end of the day though, we hope this event taught you a little more about yourself and your abilities, and how to rely on your skills when these emergency situations arise,” White added.