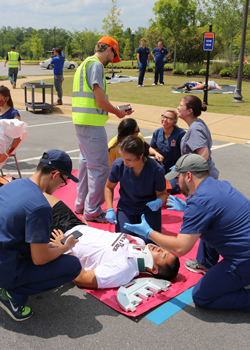 The first phase of the event in the morning featured a HAZMAT situation that was the result of a simulated collision between transit buses and a truck carrying compressed gas cylinders. This accident resulted in the simulated leak of hydrogen sulfide, causing numerous casualties. Local firefighters donned chemical-resistant suits and simulated a response to the chemical release. Victims were then taken through a chemical decontamination wash tent operated by RMS hazardous materials specialists prior to triage. After evaluation, victims were taken to one of three simulated emergency rooms that were setup in the VCOM-Auburn building multipurpose room.

That afternoon, phase two of the disaster simulation involved a tornado striking the VCOM campus, causing heavy damage to the exterior of the building. Numerous casualties resulted, requiring the AU Campus Community Emergency Response Team (CCERT) to search out and rescue victims. Patients were then evaluated and transported to the simulated ER facilities at VCOM-Auburn for treatment.

"I think our faculty, staff and students did an exemplary job of taking the disaster scenarios seriously, completing their assigned roles with impressive competency and great enthusiasm, said J.J. White, DO, PhD. White, who is VCOM-Auburn’s Chair of Emergency Medicine, served as one of the disaster drill team leaders.  “It was inspiring to see Auburn University and VCOM come together to make the day a success, which will hopefully translate into a safer, more prepared campus for all of us," added White.

According to White, the disaster drill also served as a final exam for students to receive their National Basic Life Support certification. Students were debriefed after each scenario, and evaluated on their response.

First-year students applied makeup to members of their class, who also served as victims during the drills. Bruises, broken bones and lacerations were all created on students, who acted out the parts of injured, disoriented and struggling victims.

"I thought today's drills went well and were beneficial training to all the parties involved," said Michael Freeman, a hazardous materials technician with the AU Office of Risk Management and Safety. "The afternoon session was great training for CCERT and the fire departments appreciated the suit time this morning," Freeman added. "We'll take what we learned and build on it for next year," said Freeman.

"This was a wonderful experience, and it is nice to get our heads out of the books and apply some of the knowledge we've learned over the last two years," said second-year VCOM student Michael Oberle. “I think the students communicated very well as a team, they remained calm and worked together utilizing the skills that they have learned,” added Ashley Uvanni, another second-year VCOM student.

VCOM-Auburn's Chair for Surgery, Paul Brisson, MD, served as a director in one of the simulated emergency rooms, and liked what he saw. "I thought the students did and excellent job," said Brisson. They were able to make diagnoses and recommend treatments with minimal coaching," said Brisson.